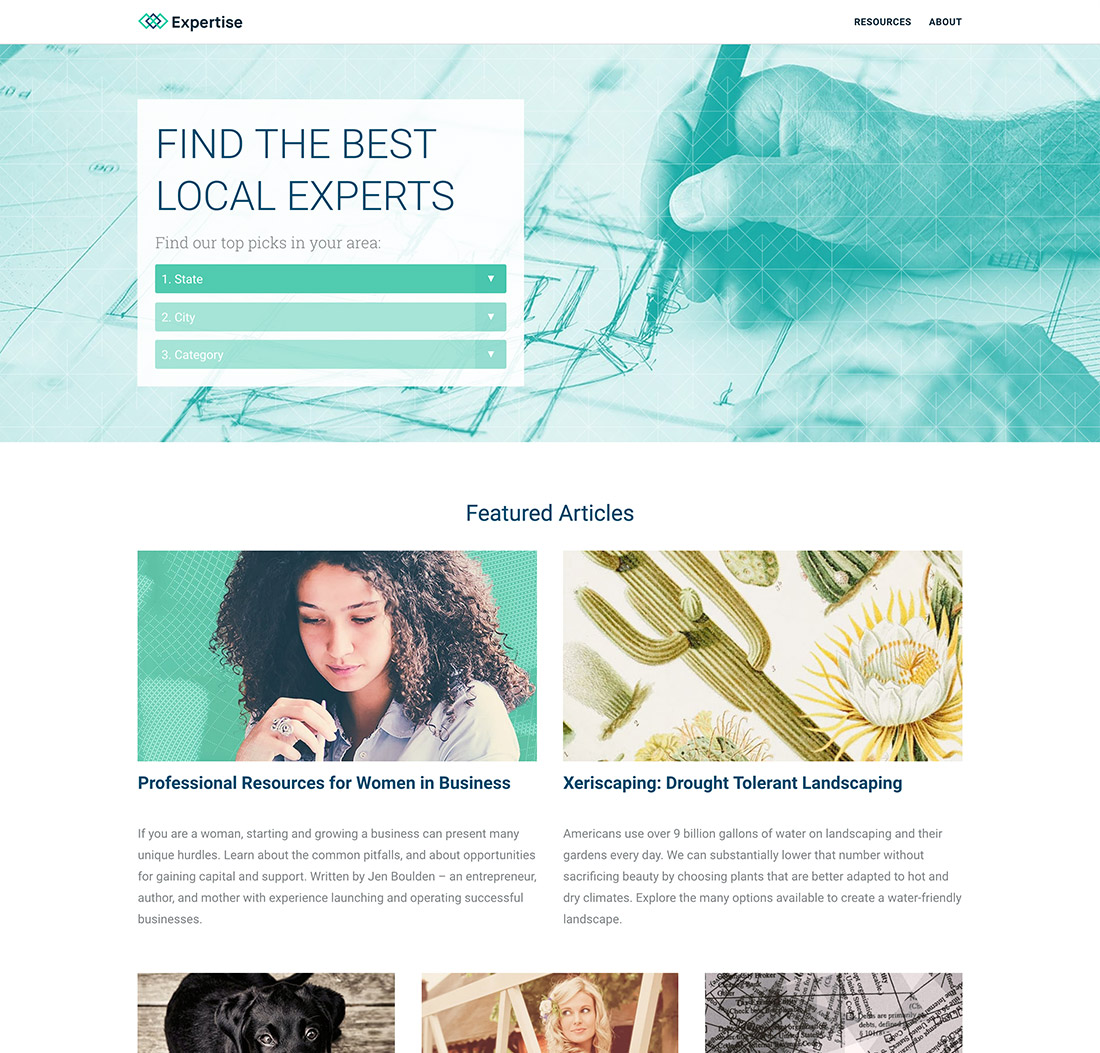 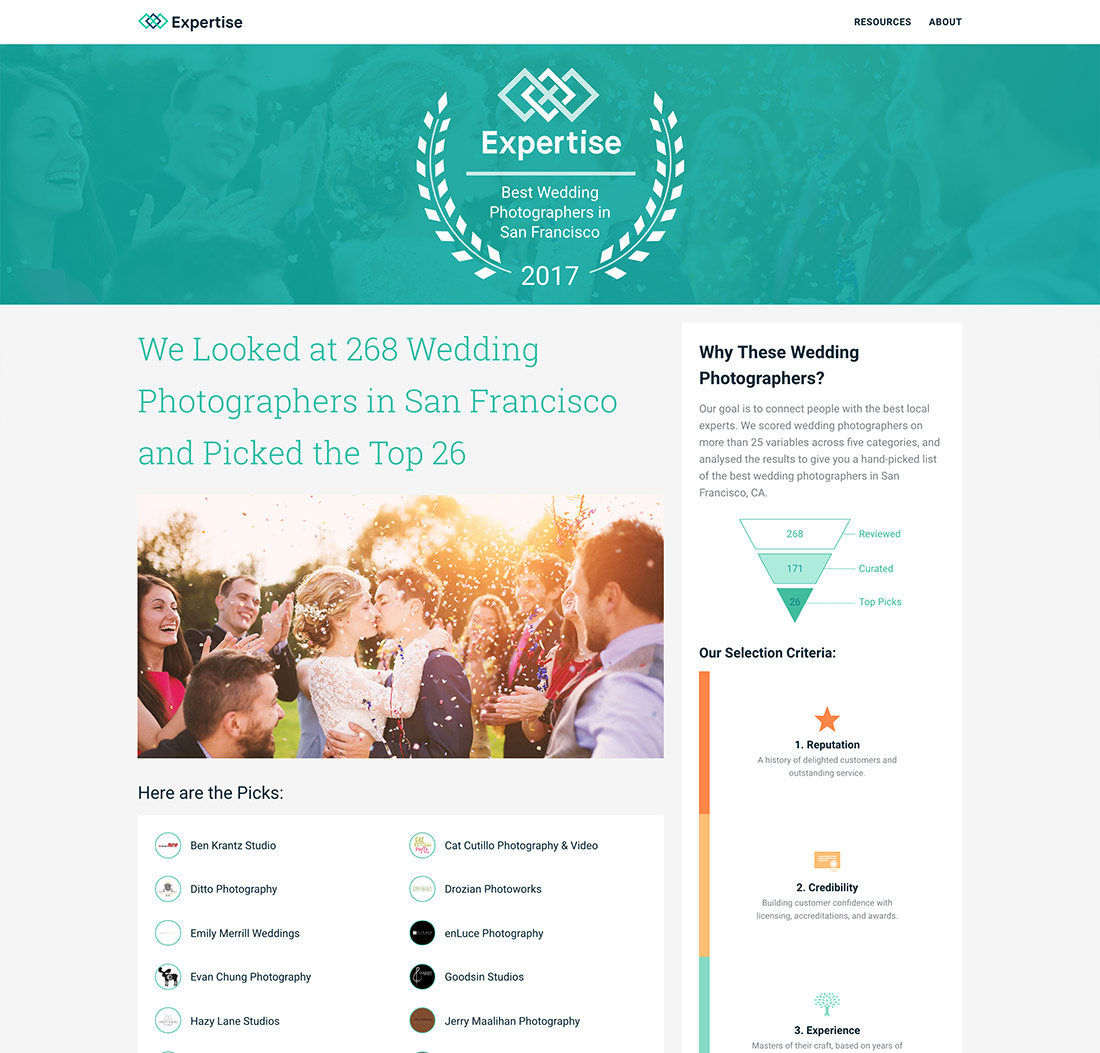 Expertise is a startup designed to conquer the local services space. Everything was designed from the ground up with scale in mind to try to eat Thumbtack's lunch.

Our competitors were releasing low-quality automatically generated business directories, and I came up with the idea to create high-quality review pages similar to the Wirecutter. We ran a test with the page “best wedding photographers in los angeles” and achieved shockingly good results (6 of the 20 featured photographers agreed to link to the page).

I assembled a fully-remote team of >30 writers and 5 offshore designers. We created over 2500 unique articles with listings for over 50,000 businesses, and I was involved in every aspect of their creation. I created tightly optimized processes for logo collection & preparation, writing, and QA that brought the total cost down to ~$15 per page, and each page brought in an average of 3 – 5 inbound links while also building enthusiasm among business owners and laying the groundwork for a two-sided marketplace.

(To put that cost figure into perspective: the average cost to acquire a real high-quality link to your webpage is ~$350, so the cost was 1/100th of that while also helping to build positive relationships with future customers.)

In the span of two years we successfully grew from 200 to 10,000 daily organic visitors and from $1000 to $600,000 in SEMRush value (the approximate value of our ranking on different search terms), successfully getting on the first page for many highly competitive terms. 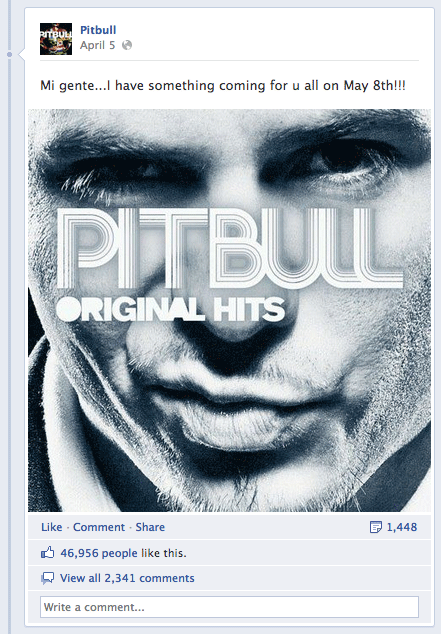 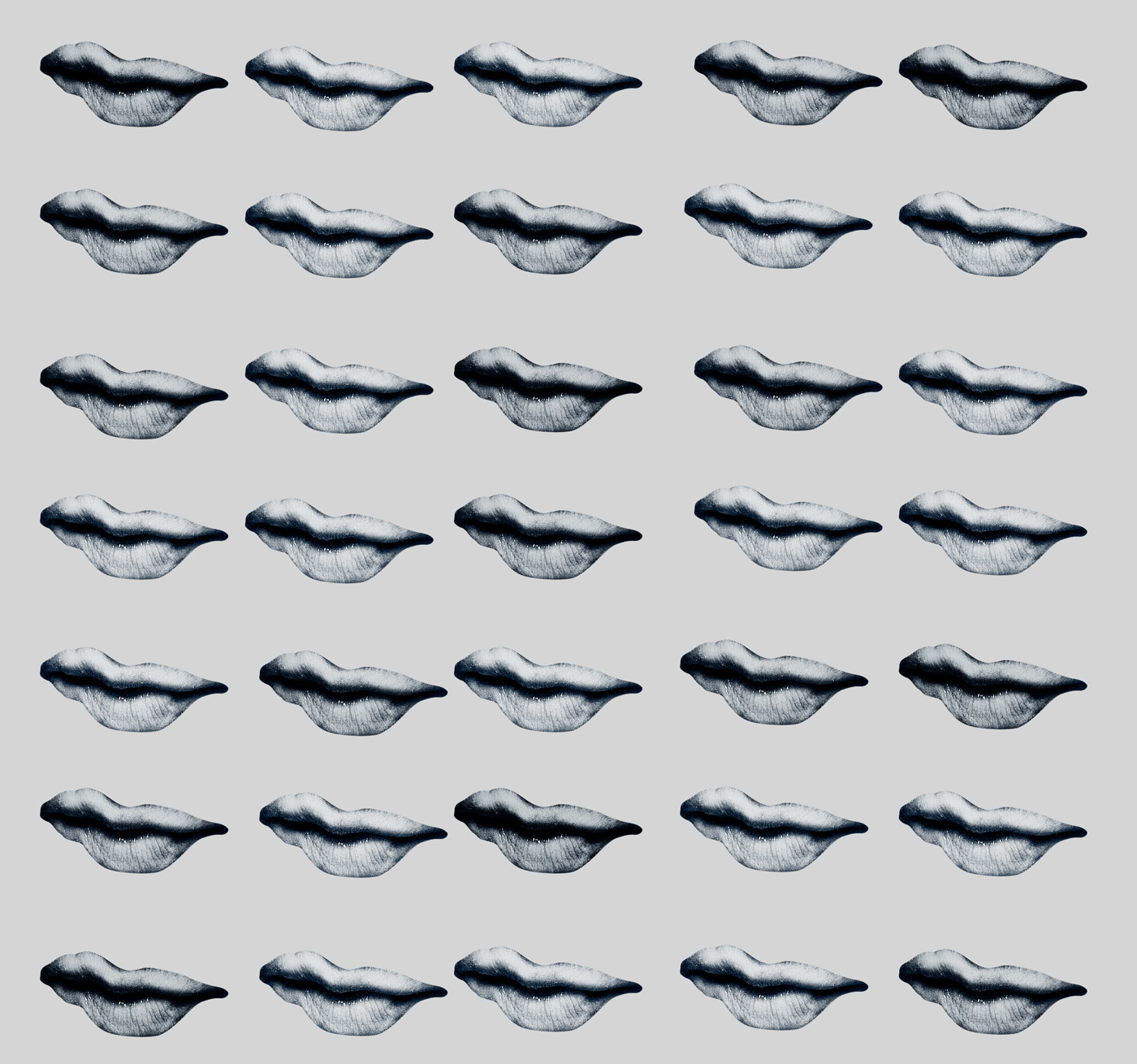 I designed an album cover for rapper and pop icon Pitbull at the height of his popularity.😎

After The Orchard bought TVT records, we owned the rights to Pitbull's music before he signed to Sony, so we decided to release a compilation album. I was given a hard drive of old Pitbull photoshoots and was told to "go nuts".

I talked with some people at the label more familiar with his body of work, and discovered that he is known for a signature expression: slightly pursed lips + a knowing smirk. I noticed the expression over and over again in his photos, and I was inspired to make a parody of Andy Warhol's "Marilyn Monroe's Lips" as a joke. The label manager was initially horrified, but after seeing it in context we decided to use that same close-cropped photo as the final cover. Thinking of him as a icon (in the Warhol sense), and allowing play into the process led to a fairly striking and recognizable image.

I also designed a custom typeface inspired by his early album covers and club flyers, and we worked with metallic inks to make the cover shine. Pitbull and his team were very satisfied with the final design. 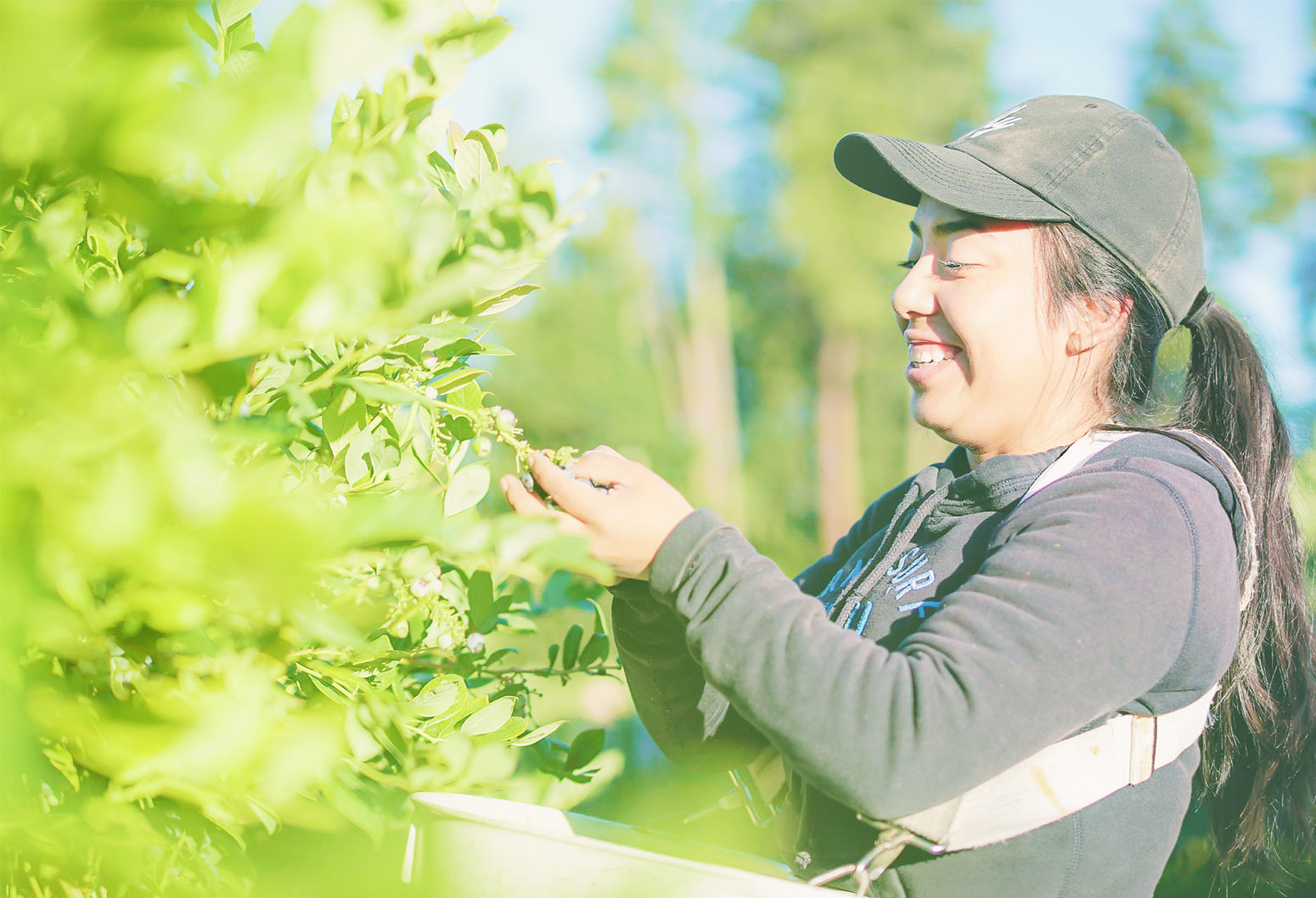 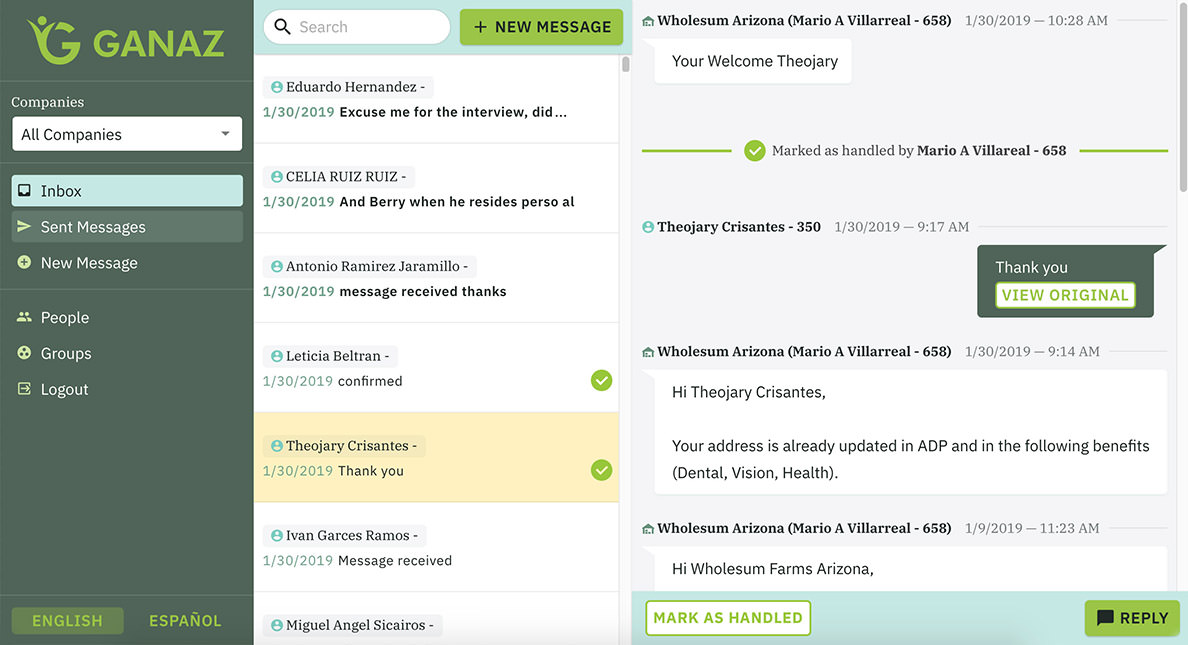 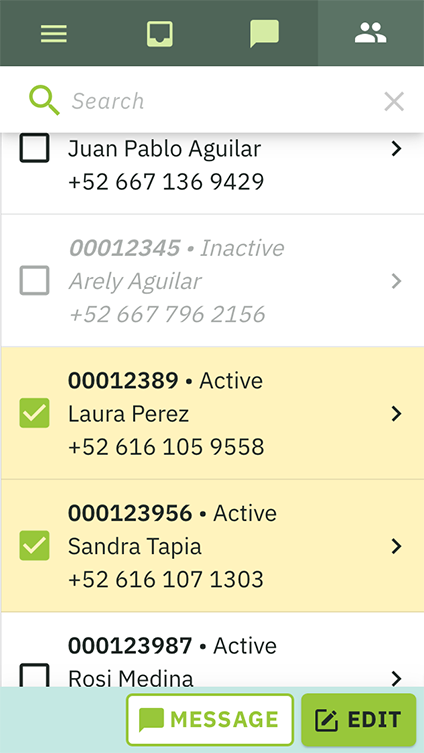 We placed a high value on generating empathy for our users: we struck an equity deal with a major farm to provide regular feedback. I was brought out on my first day to conduct interviews with migrant workers, field managers, and office administrators. A typical user on the admin side would be in her mid-50s, and only barely familiar enough with Windows and Microsoft Office products to get by. She uses Internet Explorer, and she probably has an iPhone but doesn’t know how to use most of the features (mostly using Facebook). On the migrant worker side, smartphone proliferation was only around 60% or so, with extremely limited access to data: hence the emphasis on SMS.

In a 2 month sprint I created an entire design system, React component library, and coded the fully-bilingual user interface for a functional MVP in time for a hard deadline (the start of the autumn farming season). This created some technical debt, but I managed to lay a solid foundation to continue building on.

In the admin interface you had to be able to:

This is a complex paradigm of unusual features, but we received enthusiastic feedback from users based on our surveys. The design intentionally borrowed heavily from familiar design patterns found in Outlook, Excel, Google's Material Design, and texting apps like WhatsApp to create a logical interface that felt familiar. The design became a major selling point and product differentiator. 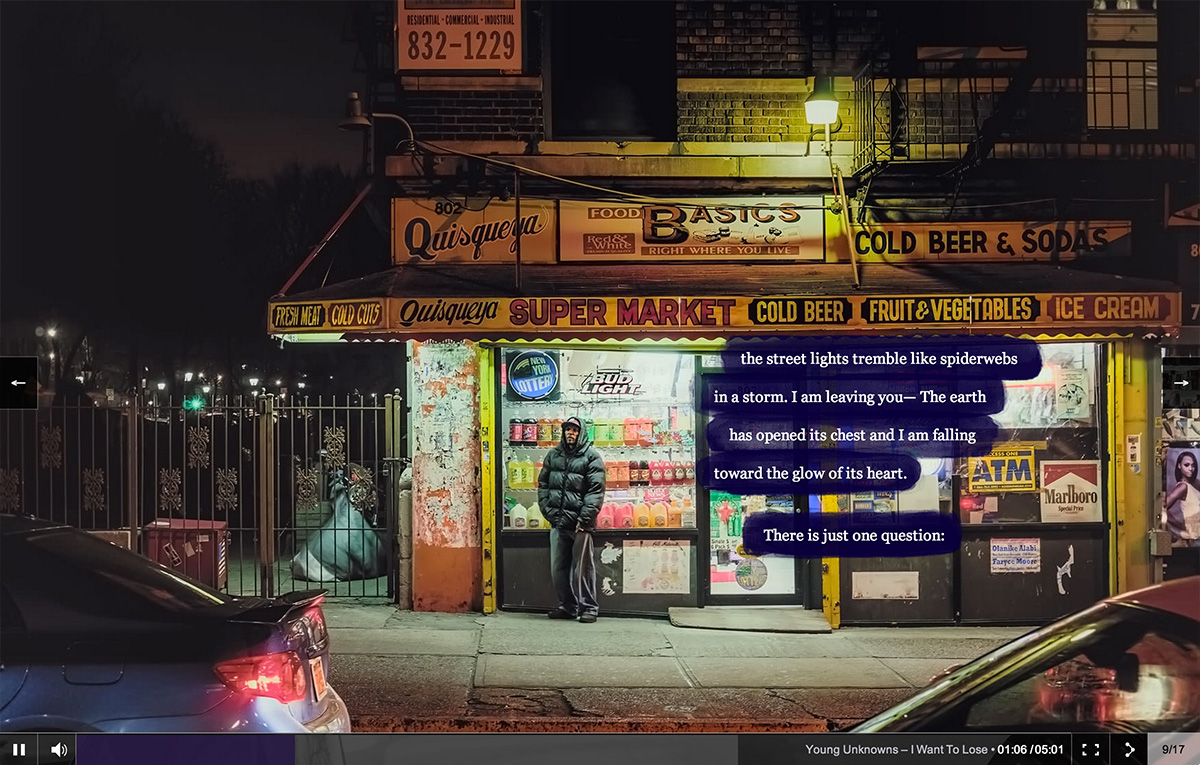 After I participated in the production of the award‑winning interactive documentary "Welcome to Pine Point", I noticed that there might be a reusable format: a series of digital spreads set to music and meant to be read in sequence. This is an interactive music video and proof of concept project.

In cinema, motion and sound have proven time and time again to combine in unexpected and powerful ways. This approach combines some of that power with the benefits of giving the viewer the option to remain on a spread to contemplate or to quickly skip ahead at the pace they desire, which lends itself to a certain kinesthetic immersion. The use of text frees up the visuals and the audio to be less literal and to form their own parallel lines of thought.

Code created for this project was also used in the project "Living Los Sures: 89 Steps".

"Wall Cloud" received some attention at The Orchard and I was asked to spec out what it would cost to create these projects for album releases at scale, but they balked at the budget I proposed (which included ample pay for illustrators, poets, and other creators). In retrospect I should have been more conservative. 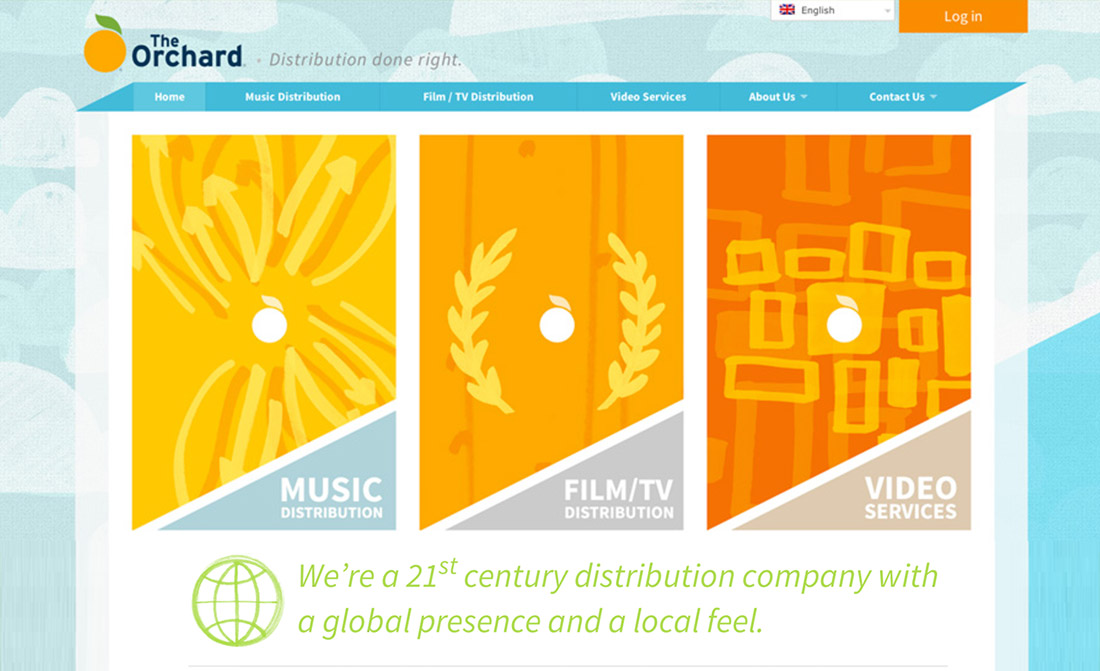 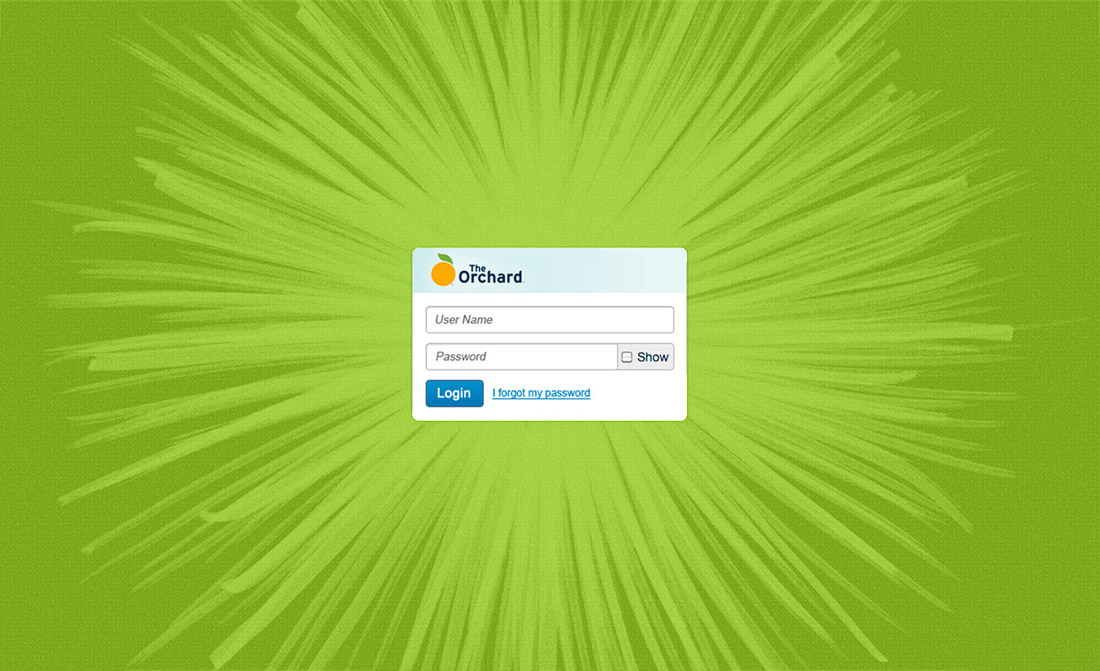 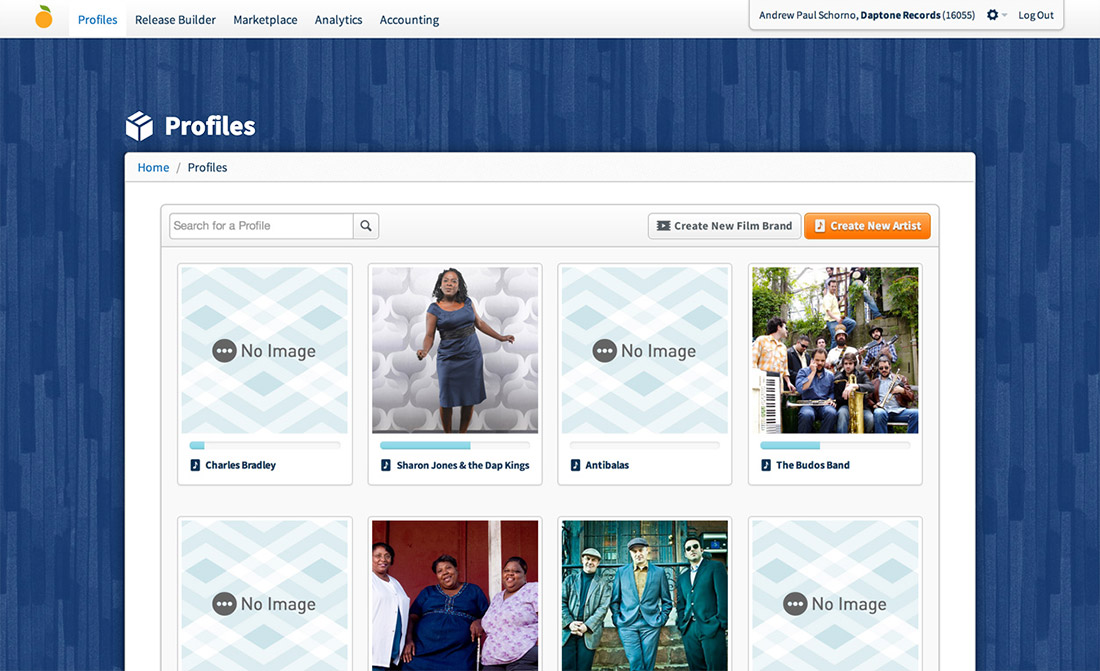 The Orchard is a major distributor of music, film, and TV content, and I acted as the primary point person coordinating the design team and prioritizing needs across the corporate marketing team, an externally facing design studio that produced marketing materials for high profile bands and film/TV releases, a large legacy suite of products, an internal app store, and several sub-brands.

I led a small team responsible for making microsites and marketing materials for album releases, but I was also not afraid to get my hands dirty and personally designed an album cover Pitbull, a full website redesign for Ra Ra Riot, and t-shirts for Broken Social Scene.

After I was given responsibility to maintain some of our legacy products (primarily our 3rd party app store), I noticed the overall design of the products was extremely fractured: I counted no less than 8 different sans-serif fonts on our homepage, for example. I made it my mission to take ownership of standardizing the design, and "reverse-engineered" a style guide and design system that matched with our existing brand voice. I slowly convinced people in a variety of departments to implement it piece-by-piece, which culminated in a full redesign of the corporate website and marketing materials.

We also formed a team of musicians to create compilation albums out of existing material, and there was a need for 30 – 50 album cover designs per day. I taught the whole team of ~10 people how to design album covers from scratch: creating lesson plans that taught the basics of design theory, how to use photoshop, and how to generate reusable brands/templates.

Air Mediaworks is a funding source for local public TV and Radio Stations to make interactive stories. I created a site to showcase the year's funded projects and lead in the potential visitors.

The overall idea of the map comes from one of their bold claims: the idea that when these projects all come together they can represent the American experience. I carved block prints of different sections of the US map, which then move independently on the site.